Unfolding The Chemistry Of Beer

Beer production in the world totals approximately 1.7 billion liters. Here’s all it takes to make the most popular worldwide alcoholic beverage.

Beer, in its most basic form, is an alcoholic beverage made from the fermentation of sugars generated from malted barley and is flavored with hops.

It is a complex alcoholic beverage with several flavor-active ingredients in varying quantities. The beer flavor is a delicate balance of all these chemicals. Therefore, it is challenging for brewers to generate flavor consistency in their products and preserve flavor balance for as long as feasible in the marketplace.

Brewing methods were brought to Europe from the Middle East. Many of the English terminologies used in brewing (malt, mash, wort, ale) are Anglo-Saxon in origin. During the Middle Ages, monastic orders kept brewing alive as a craft. Hops were first used in Germany in the 11th century, and they were imported to Britain through Holland in the 15th century.

Brewing is a large-scale industry in the twenty-first century. Breweries today use stainless-steel equipment and computer-controlled automated operations, and beer is packaged in metal casks, glass bottles, aluminum cans, and plastic containers. Beer is currently exported worldwide and is manufactured under license in other nations.

Malting, milling, mashing, extract separation, hop addition, boiling, removal of hops and precipitates, cooling and aeration, fermentation, yeast separation from young beer, age, maturation, and packaging are all steps in the beer production process. The goal of the entire process is to convert grain starches to sugar, then extract the sugar with water and ferment it with yeast to create the alcoholic, pleasantly carbonated beverage. 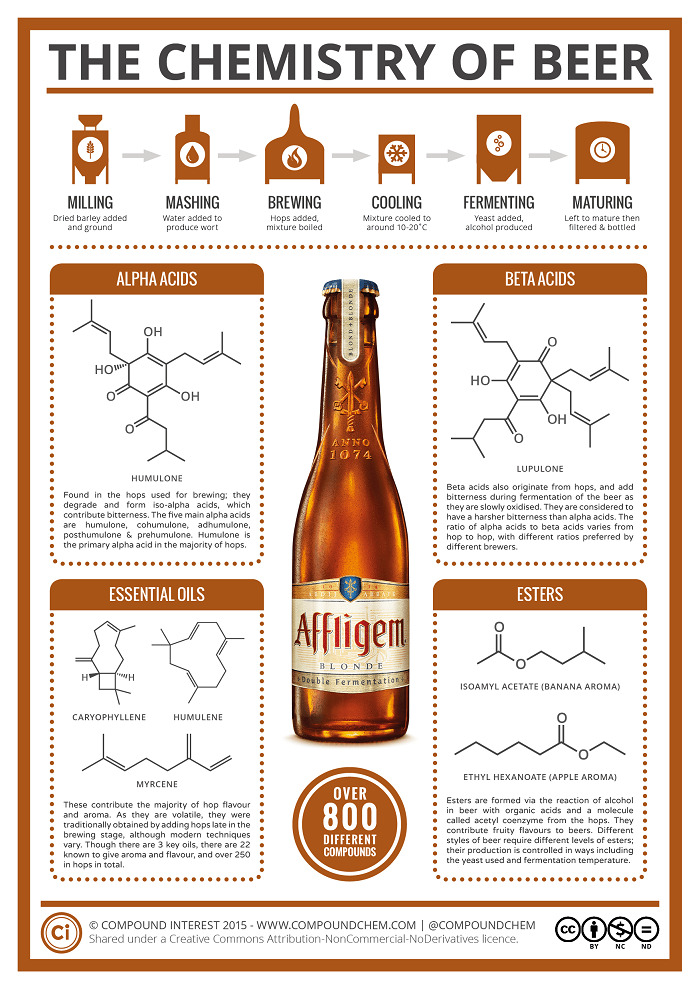 Malting – The purpose of malting is to make starch readily available during the mashing process to be converted to a range of fermentable and unfermentable sugars, provide a source of amino acids and proteins for the yeast to be able to thrive during fermentation, and produce a final product which is stable, capable of storage and transport to the brewery.

Malting converts barley into green malt, which can be preserved by drying. The procedure includes steeping and aerating the barley, enabling it to germinate, and drying and curing the malt.

The malting process has three stages that contribute to converting barley into malt.

Steeping – The seed is soaked to start its growing

Germination – The barley grows under controlled conditions and changes inside the kernel.

Kilning – The malt dried out, and color and flavor are developed.

Mashing - After kilning, the malt is combined with water at temperatures ranging from 62 to 72 degrees Celsius (144 to 162 degrees Fahrenheit) to complete the enzymatic conversion of starch into fermentable sugar. The wort (aqueous extract) is then separated from the remaining "spent" grain.

Malt must be milled before it can be extracted with water. The malt enzymes turn the starch into sugar.

The enzymes are sensitive to the conditions under which they work; they are impacted by the amount of water present, temperature, and pH (mash acidity), as well as mineral ions, particularly calcium, which combines with phosphates from the malt, resulting in a decrease in pH. In addition, they take time to work; thus, the amount of time allotted for mash conversion will affect the degree of conversion. 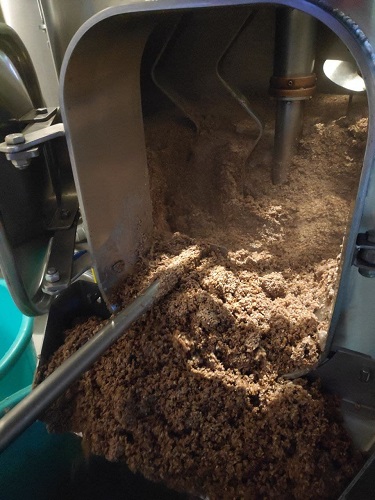 Figure No. 2 Spent grain after extraction of wort

After completing the mashing, filtration is performed to get sweet wort, a solution containing approximately 12–14 percent (w/w) sugar. The filtration of the mash (also known as lautering or mash filtration) removes solid debris such as wasted grains. Many undesirable fatty acid compounds are eliminated along with the particles and turbidity. Much research has been conducted on the impact of wort clarity after lautering on fermentation performance and, later, taste stability of the final beer. 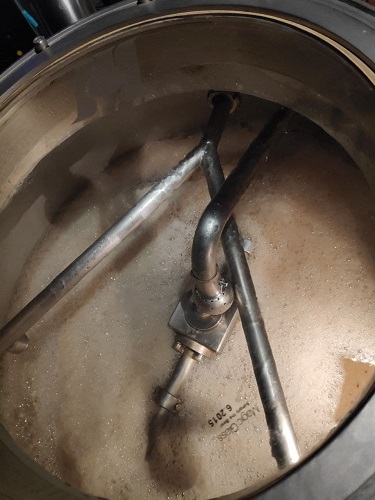 Figure No. 3 The Process of Lautering

After lautering, the sweet wort is boiled for at least 1 hour with hops, which are the flowers (called cones) of the female hop plant that add flavor to beer. Boiling serves several purposes, including sterilization, enzyme deactivation, protein precipitation, color formation, removal of unwanted volatile components, and, most importantly, the conversion (isomerization) of the main constituents of hops, the -acids, into the iso-acids, the main bittering compounds found in beer. 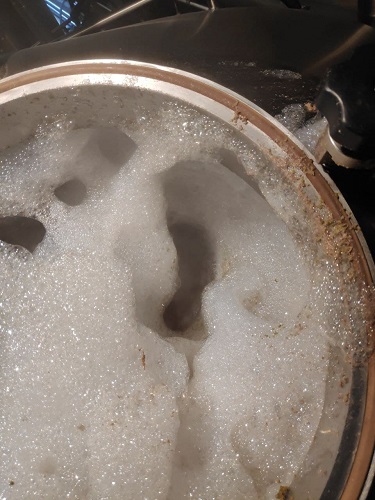 Figure No. 4 The Boiling Process

1) Proteins and phenolic components in malt form insoluble complexes and precipitate. This is necessary to improve the colloidal stability of the final product.

2) The wort darkens due to the development of melanoidins as a result of sugar-amino acid interactions, oxidation of polyphenols, and sugar caramelization.

3) Many volatile chemicals found in malt and hops, such as volatile sulfur components, aldehydes, and hydrocarbons, are evaporated. This is critical for the final beer's quality because many of these volatile chemicals are thought to be detrimental to beer flavor. 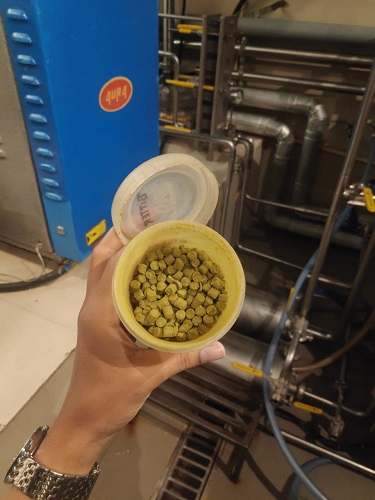 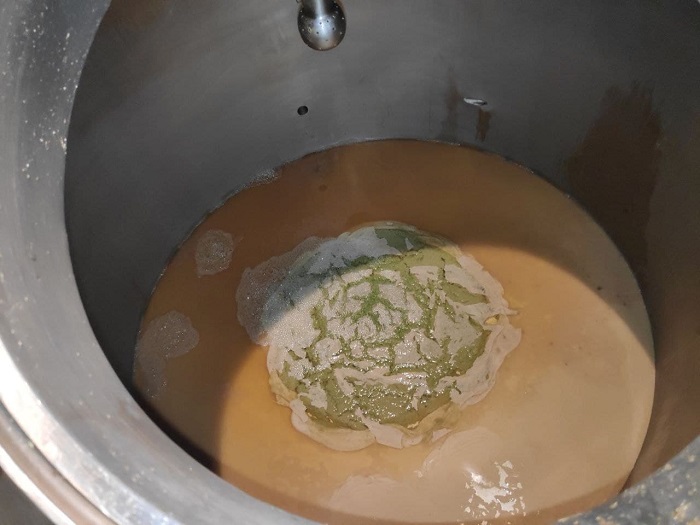 Figure No. 6 Trub (Hop Debris) left in the whirlpool

Boiling concentrates the wort to the strength required for fermentation. Per hour of boiling, the volume drops by 8–10% on average. Finally, boiling sterilizes the wort, which is necessary to avoid microbial spoilage during the following steps in the process, fermentation, and maturation. The wort is cooled after boiling, and solid debris precipitated proteins, spent grain, and spent hops are removed, leaving a clear liquid (hopped wort) suitable for fermentation. 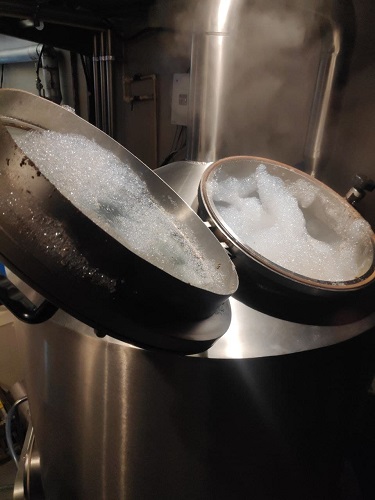 To aid yeast development, yeast is added, and the fluid is aerated. Yeast turns the fermentable carbohydrates into ethanol and carbon dioxide during the primary fermentation phase. 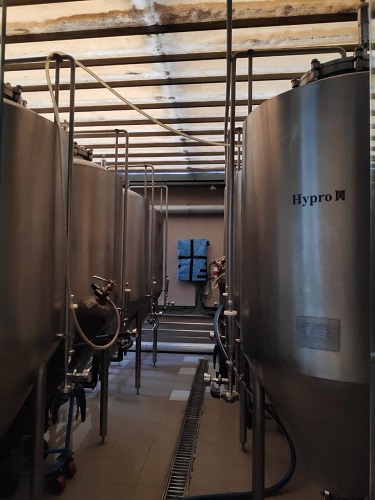 Several other flavor-active volatile components, like esters, aldehydes, and higher alcohols, are generated as by-products of fermentation and contribute significantly to the flavor of the final beer. The yeast strain determines the mix of these flavors, and the fermentation circumstances determine the combination of these flavors, allowing brewers to generate distinct flavors in various beer kinds. It comprises an excessive amount of unpleasant flavor components, which are also created during the primary fermentation. It requires many weeks of maturation or conditioning at low temperatures. Off-flavor chemicals are either converted (reduced) into less flavor-active molecules by the surviving yeast cells or purged by carbon dioxide.

Diacetyl and 2,3-pentanedione are the most prevalent chemicals that must be monitored during maturation. Because of their low flavor threshold value, these chemicals are particularly undesirable in lager-style beers. Therefore, the beer is ready for filtration and final packaging in kegs, bottles, or cans only until the concentration of these flavor-active components has dropped below a certain level.

Malting and brewing technology has mainly remained traditional over the years, but the process's efficiency has grown due to a better understanding of the technology and its science. Cost reduction, for example, through more effective use of raw materials and lower energy use, drives innovation in the brewing sector, as does the demand for increased quality, safety, and wholesomeness of the end product.