Algae have not always had the finest reputation. But times have changed. The eye-catching drink has piqued the public's interest and curiosity. Let us dive right into the article to know more.

These French brewers have recently made news with their blue beer brewed from algae.

The beer brand "Line" results from a tie-up between a company (Etika Spirulina) aiming to popularise algae as a dietary supplement and Hoppy Urban Brew — based in the city of Roubaix, a local craft brewery looking for a way to differentiate its beverages.

After 1,500 bottles of the 3-percent ABV drink (named Line) sold out in the last three months of 2021, the brewery is apparently already working on increasing production.

"At first, it was a bit of a difficulty to have a blue pigment rather than the green that you may get when using raw spirulina." However, after several rounds of testing, the brewers ultimately found a mix that produced the color — and taste — they desired, said  Xavier Delannoy, the brainchild of the Etika spirulina Project.

The beer is marketed as a session IPA. While tasting HUB's, Mathilde Vanmansart described it as a very light beer, and the drink's characteristics shine through with a strong hop flavor and subtle citrus undertones. In addition, it has a low alcohol concentration. There's also a hint of lychee in the back of the mouth, while the only evidence of the added algae was its distinctive color. 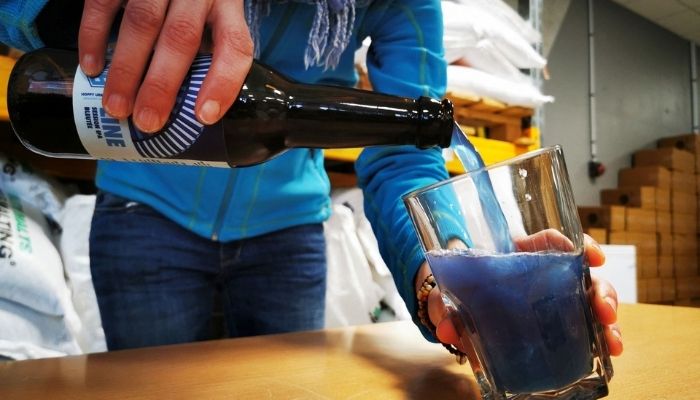 The beer gets its blue tint from spirulina, algae grown in basins by Etika Spirulina, a company located in northern France. Spirulina is a form of cyanobacteria, a family of single-celled microorganisms known as blue-green algae. The ancient Aztecs consumed spirulina, but it gained popularity again when NASA claimed it might be cultivated in space for astronauts to utilize. It is considered one of the most nutrient-dense foods on the planet. Spirulina is high in antioxidants, which can protect against oxidative damage. In addition, Spirulina contains a significant amount of protein and vitamins, making it a great dietary supplement for vegetarian or vegan diets. It contains thiamin, riboflavin, niacin, folate, and vitamins B-6, A, and K. Its principal active ingredient is known as phycocyanin, a non-toxic, water-soluble pigment protein. This antioxidant compound is also responsible for spirulina's distinctive blue-green color. It is added to the beer during the brewing process. 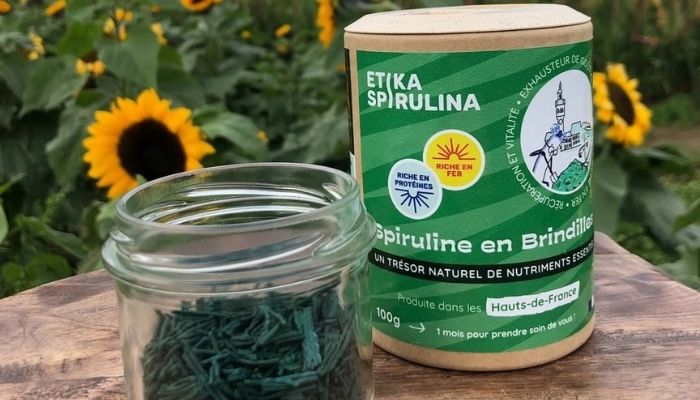 Algae are a broad category of aquatic organisms that can perform photosynthesis for those unsure what algae are or need a refresher. Algae are basic, nonflowering plants that belong to a vast category that includes seaweed and many single-celled organisms. These plants have chlorophyll and other pigments for photosynthesis, but they lack roots, stems, leaves, and vascular tissue. Algae are found in or near both salt water and fresh water in nature and can range in size from microscopic (microalgae) to gigantic seaweeds (macroalgae), such as 100-foot-long giant kelp. Algae are highly diverse and can be found practically anywhere on the earth. Cyanobacteria (similar to bacteria and once known as "blue-green algae") and green, brown, and red algae are all examples of microalgae.

Certain algae have traditionally been consumed as whole foods, primarily in Asian countries such as Japan, transforming various seaweeds (including nori, wakame, hijiki, and konbu) into snacks, side dishes, etc. garnishes. In fact, Young Henrys, an Australian craft brewer, has collaborated with climate change scientists to create a method to capture CO2 and convert it to oxygen using microalgae. According to the brewers, their algae releases as much oxygen as two hectares of bushland. In addition, some European cultures, such as Norway, France, and Ireland, have a tradition of consuming algae; however, in the United States, algae consumption has remained primarily outside of the mainstream. But this is changing as the plant is recognized for its versatility and usefulness as a food additive, supplement ingredient, functional food and beverage ingredient, and superfood.