When it comes to great beer and Indian food, nowhere does it better than Bundobust. We spoke to co-owner Marko Husak to find out more

Most restaurants, in Britain and elsewhere, focus on wine as a match for their food. This is for financial reasons as much as anything else - the mark-up on a bottle of wine can be the difference between profit and failure for some - but it also reflects an ingrained approach in European culture that regards wine as the only proper match for high-quality food. Beer? Maybe with pizza or chips.

Bundobust, a family of restaurants that pair Gujarati cuisine with beer, is not a traditional place, either in terms of atmosphere or food. Excellent vegan food is served in biodegradable pots, while a relaxed atmosphere means customers can come in for a drink without having to eat a thing.

Bundobust, which now has four restaurants and a brewery in Leeds, Manchester and Liverpool, is owned and run by Marko Husak and Mayur Patel, both from Bradford. The newest site - which includes a 10-hectolitre brewery - opened recently in Manchester, with plans for continued gradual growth over the next few years.

“It’s a restaurant with a brewery, essentially,” says Marko. “The beer is tasting great, so I’m really happy with that. It’s selling like crazy. It should take us to eight sites, in terms of volume, if we’re smart.” We caught up with Marko to find out how they pair Gujarati food with a diverse line-up of beers.

How focused are you on matching beer with food at Bundobust?

“We’re quite loose, although we definitely nudge people towards certain beers with certain dishes. We’ve done beer pairings before, where we’ve had a beer that goes with a certain dish, but we like to be pretty flexible and to allow the guests to make their minds up.” 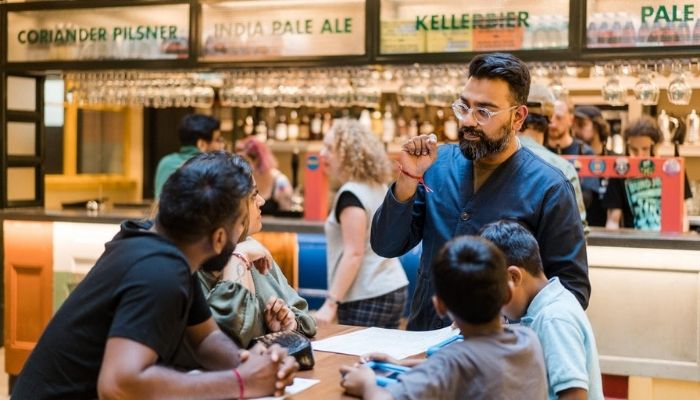 That reflects the atmosphere at Bundobust, doesn’t it?

“It is a laidback space, you don’t have to commit to coming for a meal. You can call in for half a pint of beer on your way home, or you can come with a group of mates and have a variety of dishes and a variety of beers. If someone wants to come in for a Foster’s, we’re not snobby about that - we’ll just gently guide them towards the house lager, which is Flensburger.

“It’s relaxed. We’re not like a traditional restaurant where everyone needs to order a starter and a main course and a dessert - it’s an in-and-out casual place. I think that’s been the secret of our success. We don’t take ourselves too seriously but we do know what we’re doing.”

What are your favourite matches?

“The paneer tikka, which is grilled, actually gets quite sharp - so we’d recommend a nice porter. I think porters are underrated when it comes to Indian food. I think a lot of people think hoppy pale ales [for this dish] but those grilled, smoky, BBQ flavours play really well with a porter.

“With our Bundo Chaat [layers of samosa pastry, chickpea, potato, onion, sev, and chilli sauce] we’ve been recommending our Peela, which is a 4 percent, kind-of-tropical pale ale; the fruity flavours in both dishes play off each other. And in the past we’ve had a Schneider Weisse matched with banana and fenugreek bhajis, which was a stunning pairing.” 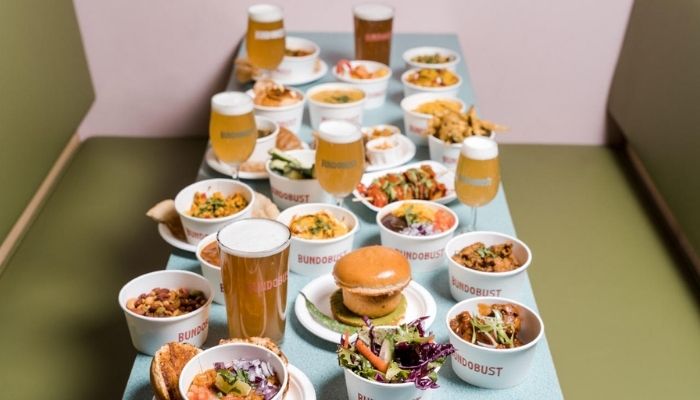 There’s a fashion at the moment for low-bitterness, very fruity IPAs. Do they work well with your food?

“I think so. We’re making two IPAs at the moment: one’s soft and pillowy, a New England IPA, it’s dead smooth and no hard edges. It works a bit like a mango lassi - not exactly the same, of course. But you have that texture, where it’s all smooth. On the flip side, you can have one with a bit more malty backbone, like our West Coast IPA, which is not too bitter. It’s got that toffee element as well as the hops, which gives it great balance. That works too.”

How important is texture when you’re matching beer with food?

“I think you need something thick, it holds up to the spice a lot better; it smooths things out, it almost resets the palate. I think with thin beers like a light lager, when you’re eating spicy food it’s not doing anything. Texture is very important. You need body to stand up to spicy food.”

How well do cask ales work with your food?

“I can see a nice Mild working very well, actually, and we’re going to experiment brewing a Mild. We’ve done one test batch - that might prove to be the first cask beer we put out on the bar. I think it would stand up well. It’s not all about hops … another one that would work well would be Thornbridge Seaforth, a British IPA. I think that would be pretty banging with a curry, with its more old-school character. We sell a lot of old-school bitters over the bar, like Marble Bitter.”

What beers are popular with Bundobust customers?

“We’re like any other pub with good beer, I think - the 4 percent pale ales and the lagers fly out. We get a lot of fruit sours on - North Brewery does some fantastic ones, Vault City, Funky Fluid from Poland. Sours always do well.”