Over 2000 active breweries in the UK demonstrate an astounding turnaround from 20 years ago, and this reflects in the 2019 London Beer Competition.

As the big brewers cry into their beer, the UK brewery scene has exploded with over 2000 breweries now in active production. It is an incredible turnaround from 20 years ago when there were less than 500 breweries in the UK.

The number of entrants into The London Beer Competition reflects this growth. The importance and relevance of peer judging as a key tool to gain significant traction in the market cannot be under-estimated.

The London Beer Competition judges come from all aspects of the industry – marketing, PR, communications, sommeliers and cicerone, educators, brewing, trading, and commercial. This eclectic mix of judge professionals was drawn from Euroboozer, Brewdog, The British Guild of Beer Writers, The Bottle Shed, and The Drink School, amongst others.

No longer can sheer volume buy its way to success in this intensely competitive market. Instead, peer approval and the beauty being judged by those consuming as opposed to what they are provided with. Hitherto brewers in the UK would amble up to the market with massive market dominating plans, eye-watering advertising budgets (adverts which became famous mini-films and stories in their own right) and two years later new product would emerge and try to establish itself. The market increasingly reported that we don’t want to be told what to drink, we want to find our own way.

Based at The Worx in central London, a studio with photographic artistry by the talented Brian Aris on the walls, featuring many a star of today and yesteryear, this year’s London Beer Competition judges gathered on March 22nd to select the stars of the beer world. 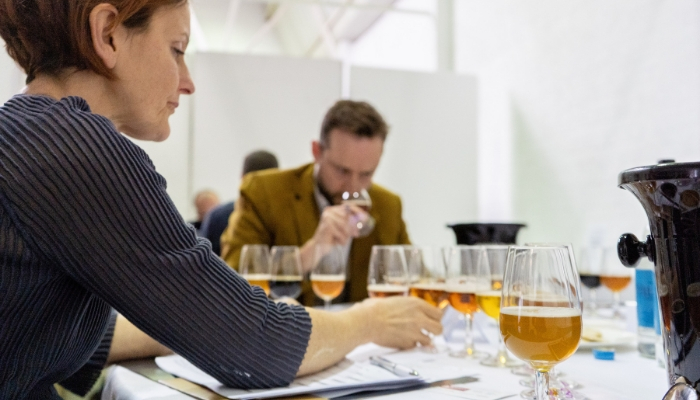 Exclusively developed by Beverage Trade Network the US drinks events, services, business, and publishing group, the London Beer Competition judges the entries on a unique mix of quality, value for money and packaging. In essence how the consumer judges products.

Different beer categories were defined and judges then assess the products in each flight. A stout, for example, will be judged with similar stouts as opposed to IPAs or lager. Each judge can expect to sample over 50 different beers during the course of judging.

Quality is, of course, the first benchmark by which products are seen. Without quality then consumers will not buy, and if they have bought the first time then they will not buy again. However quality means many different things to different people. Judges have to have the freedom to define boundaries and quality and the London Beer Competition’s framework allows each judge to ensure that they have a direct say in the result.

Each product is scored without the sight of any packaging, so purely on the quality of the liquid in front of them. This score is given a 50% weighting within the overall score.

Quality at £2 means something completely different to quality at £10 or £20 for example. Value for money means something very different than it did 10 or 20 years ago. A decade or so ago value for money was almost monolithic, it was what you purchase on a shelf or in a pub or bar or restaurant. The tsunami of internet information which has deluged the UK market in the last few years has provided consumers with many more information points to judge individually what they mean by value for money. No longer do you have to view value through the lens of your most convenient retailer or pub or bar. You can judge value in many other ways on the world-wide-web. The freedom of expression that this gives both producer and consumer is a kaleidoscope of opportunity for both.

So, the next stage of the London Beer Competition judging is scoring the product for the value. Having been presented with the pricing, trade channel and target consumer the judges award a score which identifies value for money. This contributes 25% of the total mark.

Beer traditionally in the UK has been presented…well traditionally. Coats of arms, age-old irrelevant medals, statements which hint at better than average performance in certain aspects of human attainment have all constituted presentational virtues in the beer industry. No longer.

Like the brewing industry itself, the shackles of ‘how to present a beer’ have been cast off. Cartoons, serious fun, color, adventure are all contained within beer packaging today, appealing to many different markets in different ways. This last area of judging, packaging, is critical to the success of products and the ways in which it engages with consumers and its markets.

Judges have been known to change their marks on quality through experiencing the packaging of certain products. Little is known in detail about this area of human sensory perception and how it converts into resulting activity. This part of the judging clearly demonstrates that sight does affect our taste in physical ways.

From the video interviews conducted on the day then packaging was clearly seen by judges to be of critical importance, by anecdote more than science, more than in either spirits or wine. This demonstrates the consumer-led nature of the market and how, for that initial purchase, which many of these brewers are seeking from the consumer, makes that critical difference. If the brewery can make the first sale then at least they are in the game, in this hotbed of a market, thrashing around with many competitors for the second sale.

So, the London Beer Competition closed with the results being sent away for calculation, release, and publication on 30th April 2019. Competitors look forward to receiving the valued London Beer Competition gold medal, which according to many of the judges matters hugely in creating that identifiable point of difference that helps consumers make their decision at the point of purchase. Be the first one to get notified. Fill up the form on the website, https://londonbeercompetition.com and we would send you the names of the winners in your inbox on the result day.