Why Drinkers Should Raise A Toast To The London Beer Competition

A good beer is a good beer - and that’s exactly what the London Beer Competition aims to celebrate.

Now in its fourth year, this ground-breaking contest is as valuable for drinkers as it is for those who sell beer in the on- and off-trade.

Beer has changed hugely over the past decade. A world once dominated by big brands is now home to a dizzying variety of different breweries and beers. Supermarket shelves are busy; bottle-shop selections are infinite. This is just as true in France and Denmark, to name two beer-loving nations, as it is in the UK. Craft beer has changed the game, introducing a greater diversity of flavours, styles, strengths, colours and ingredients to a public thirsty for something new.

That’s great news, but it has created one big problem. How do you choose what to drink? Not everyone is an expert, and nor do they intend to be - but they do enjoy a delicious beer. That’s why the London Beer Competition is so useful. The way that it’s organised means that it aims to shine a spotlight on those beer brands that consumers really want to buy; those brands that have a clear market value for trade buyers.

How is the competition judged?

The essence of the London Beer Competition is simple. Beers are judged on three criteria: quality, value and appearance. ‘Quality’ takes in five elements: appearance, aroma, body, taste and aftertaste. Value is a measure of how the beer’s price compares to its quality; and appearance assesses the value of the packaging, taking in factors like label design and information, closure and overall look. 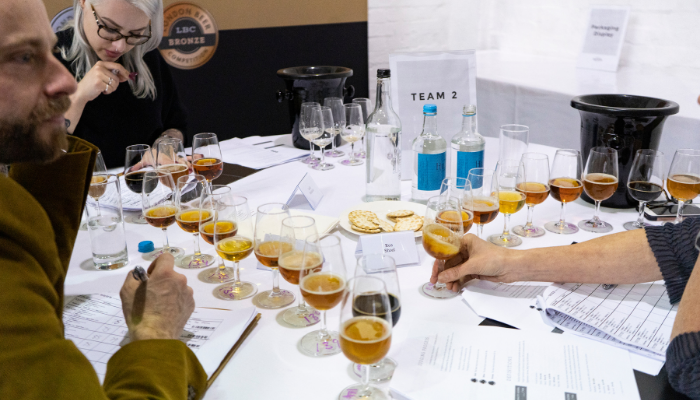 How does the judging work?

Everything is done to ensure that each beer is judged fairly and accurately. First of all, judges taste the beer blind to determine its quality; next, depending on the sample, beers are assessed by style and origin. Only when that stage is complete are judges given information about the price and target channel for each beer, allowing them to make a judgement on each beer’s value score.

The third stage of the initial judging process sees judges given the packaging, so they can make a decision on how well they think it matches up with the product within, and how likely it is to appeal to customers when it is sitting on a shelf with hundreds of others. Finally, judges discuss the beers in order to allocate scores in the three judging areas.

What does it take to win a Gold?

To win a Gold medal, a beer has to score 90 points or more, out of a total of 100. That score is made up of the three different criteria, with double-weight given to the quality section. It’s notoriously hard to win a Gold award at the London Beer Competition; last year, only eight beers managed it, drawn from hundreds that entered the competition. These included beers from Truman’s, Sambrooks and Wild Card in the UK, Southern Highlands in Australia, and Val-Dieu in Belgium.

Silver (between 76 and 89 points) and Bronze (65 and 75) awards are also handed out by judges. Although these beers are not quite good enough to qualify as Gold award winners, they’re still excellent examples, worth seeking out in any context.

Who are the judges?

The judges are drawn from across the beer industry, taking in buyers, sommeliers, brewers, brewery owners, bar owners and journalists. They include Patrick Robb, head brewer at Brewdog, and beer sommelier Cheryl Cade. There’s Mitch Adams, currently a beer buyer for Euroboozer but with huge experience across the industry as publican, author and operations director. Lolly Watkins earnt her spurs in the beer world as marketing manager for ‘There’s A Beer For That’, a nationwide campaign in the UK to promote the entire beer category. London-based Gabriele Bertucci is an accredited beer sommelier and the man behind ‘What’s In The Glass?’, an online platform devoted to hospitality.

Where do entrants come from?

Beyond 2020’s winners - which came from the UK, Belgium and Australia - the London Beer Competition draws entrants from across the world. Beers from traditional brewing nations like Germany and the Netherlands compete against rivals from Spain, Taiwan and Israel. There are beers from the USA, Norway, Poland and Finland, and many other nations, too.

What other categories are there?

The London Beer Competition is not just about gold awards. There are also prizes by country, by quality, value and package, and overall prizes for beer of the year and brewery of the year too. In 2020 Truman’s, based in East London, carried off both these prizes - no surprise, perhaps, given that their Roller IPA accrued a remarkable 93 points.

It’s perhaps appropriate that the London Beer Competition should have a winner from the British capital, but there’s no guarantee that will happen again - the quality of beers entered from across the globe just keeps on rising. The overall winners in 2018 and 2019 were from Belgium and Spain, so maybe 2021 will be the year when the top beer comes from outside Europe? We’ll find out on April 12, when this year’s winners are announced. Stay tuned.